The Business Managers Report for May – October have been posted. We apologize for the delay, the reports are now all up to date.

Election Day is here, so go out there and VOTE!!!! 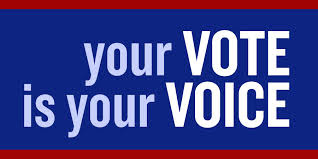 Registration and Election Information for the 2016

Registration deadline for in person-no later than Oct. 14.

Mail in-Postmarked no later then Oct. 14.

The General Election is Tuesday November 8, 2016

It is with very deep regret that we inform our Brothers and Sisters of the passing of Brother Ben Taussig.  Ben was a proud member of Local 1212 for 52 years, Executive Board Member, ABM and a vital part of many negotiations.  His loyalty to IBEW Local 1212 is surpassed by none.

Registration and Election Information for the 2016

Registration deadline for in person-no later than Oct. 14.

Mail in-Postmarked no later then Oct. 14.

The General Election is Tuesday November 8, 2016

The news you’ve all been waiting for is here, but before we get to that information please join us for Mass prior to the parade.  Details are in the flyer below: 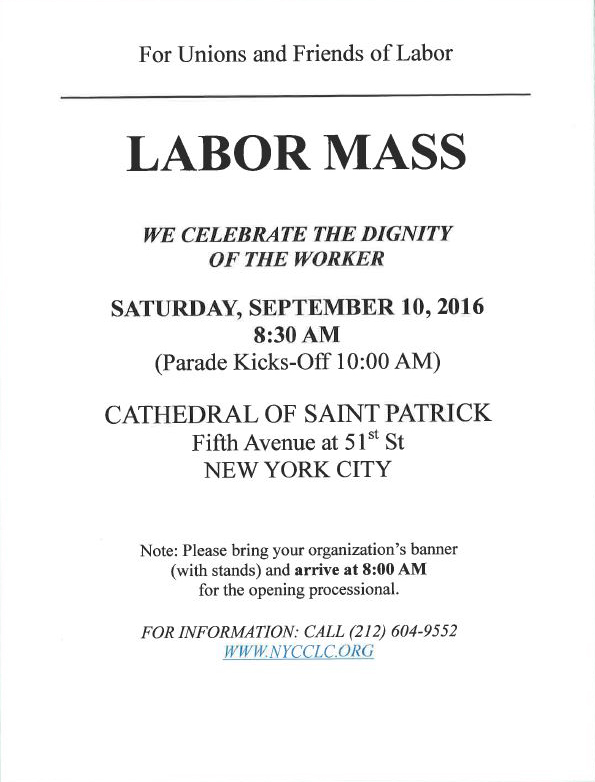 And if you just want to meet at the parade you can find us here:

The Business Managers Report for March and April have been posted. Awaiting final detail and coming soon is May – July.

Please help us Congratulate the recipients of the 2016 IBEW 1212 Scholarship Award:

Once again congratulations to the 2016 recipients. Best wishes to all of you in your future endeavors.

We are looking for eager members who are looking to help coordinate the upcoming Labor Day Parade on behalf of Local 1212.  This does entail monthly meetings to help better prepare the coordinators. You will be working with a fellow Executive board member Richard Ross from WADO. If you are interested, please contact the office (212) 354-6770 for more information.

Thank you for your interest.

As some of you may know a few of us are planning a get together in NY City to bid farewell to our departed friend, Mike O’Rourke. A photo is attached to this post in his honor, as well as the date and time of us sharing stories and rejoicing in Mike’s memory.

We hope many members come to share and celebrate his life. 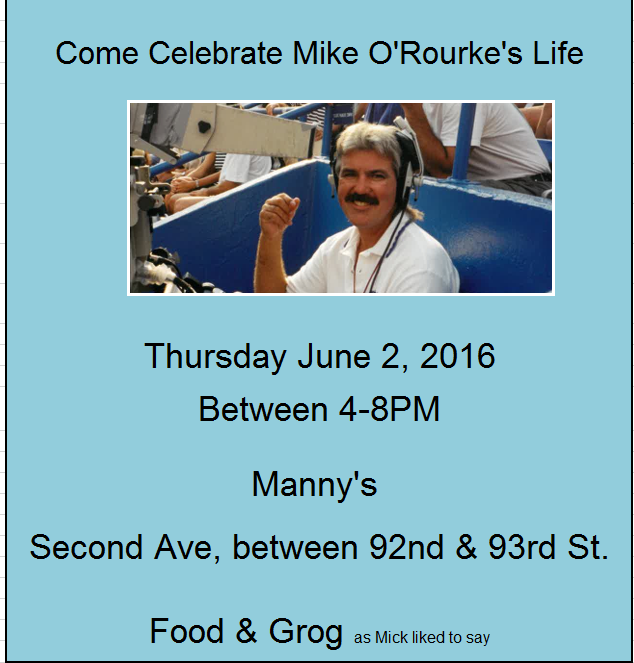 We have now completed two sessions of negotiations with Fox Sports, with the most recent taking place during Daytona.  During this last round, the company presented a group of detailed proposals for the committee’s consideration.  Some of the proposals focused on time keeping procedures for the work day, such as; quarter hour rounding for out-times; restructuring the accounting for travel-only days where only actual hours worked count towards the work week; and only counting actual hours worked towards the work week.    The company also proposed a reduction of the daily per diem.

Most of the company’s proposals can have adverse monetary effects on the membership, and is not a surprise considering 21st Century Fox’s recent economic struggles.  For that reason, it was not good timing to have economic discussions.  As a company, they are attempting a restructure to cut over $250 million from their operating budget.  And while it seems to be the Filmed Entertainment division that is struggling the most, losing 34 million dollars in the last quarter, the entire company, including the Television division, is being forced to contribute to the cuts.

We have engaged in spirited debate with Fox Sports on many of our proposals relating to, job security, cancellation policies, call times, enhanced training, and formation of a safety committee, seniority proposals, the Flex Plan, and relief staffing.  We also have additional proposals such as upgrades for handhelds and fiber technicians, which is still on the table.

Our next bargaining session is scheduled for the last week of March, and your IBEW bargaining committee will continue the process negotiating the best deal possible for our membership.  The current CBA expires on July 31, 2016, and we remain optimistic on being able to finish before then.  As this process continues, we will keep you updated as to the status.  If you have any questions, please contact your local business manager or the broadcast department.

The Business Managers Report for February has been posted.

Due to scheduling conflicts the May 9th Members meeting has been changed to May 16, 2016.  Please adjust calendars accordingly.

The Union Dues link has been updated.  Please note that this information has already been mailed and updated a few months eariler, this is just an update for the webpage.

Click here to view the page —–> YOUR UNION DUES

The Business Managers Report for December and January have been posted.

Dear Brothers and Sisters:
Wishing you and your family only the very best for the Holiday Season and a Happy New Year!
Fraternally,
Ralph Avigliano
Business Manager
IBEW Local 1212 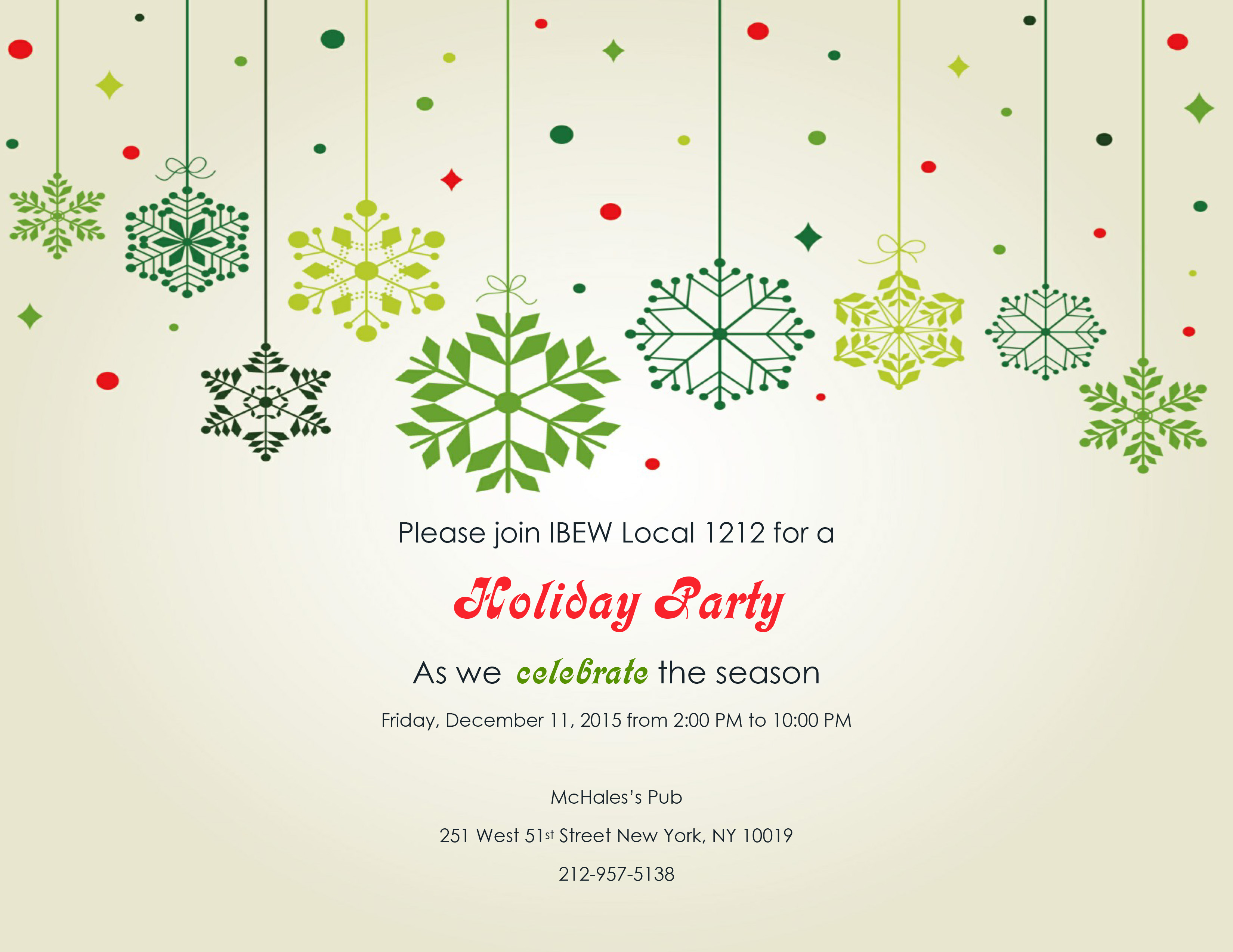 The Business Managers Report for November has been posted.

Take a look at the Officers Page to familiarize yourself with the newly elected officers.